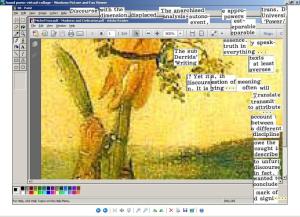 My first experimental play for this assignment involves use of screenshots taken from a PDF document of Michel Foucault’s “Madness and Civilisation” downloaded from this internet site in January. (Click on the picture to enlarge if you wish to view the text, it doesn’t contain a link)

I haven’t studied Foucault but I’m vaguely acquainted with academic artists who seem to rate his work so had to have a look and skim-read some. I became interested in fragments of the text and zoomed in, with a small window-frame, had taken screenshots of certain fragments that caught my attention back in January with no idea how or why I might want to use them. For this task, I’ve then taken screenshots of the thumbnails in the folder while viewing the files to bodge a virtual collage together, placed over a zoomed section of the illustration from the PDF document that the text is derived from. I suspect that this particular illustration is quite an old painting, but couldn’t find out any detail for this when I tried researching the image. At normal size, that particular area of the image appears less disturbing, as if it’s harvest fodder tied to the pole, but close-up it looks uncannily alike a head. I haven’t altered the image at all other than it being a zoomed section; obviously I’ve obliterated the text now removed from its original order and context.

I didn’t wish to waste paper and ink printing this stuff out to make manually – I’ve enough on paper I could use and collage with if I felt like that kind of play without creating something extra for that purpose. I might try that method later in the day after grabbing some zzzs. I maybe should have spent time considering this try better but that can always be said for anything.  I realise there is (probably!) no such word as “discoursestion” but I liked it too much to alter it, so there is now such a word! Maybe it signifies discourse-indigestion…

- the literary equivalent of sex with a clown -

In and around Dublin

In and around Dublin, with a camera in my bag. Always. And an unhealthy propensity for easy cynicism. Always.

Where all the cool squirrels hang out!

The Writing Life, Books, and Things That Make Me Go, "Ah"

fun, interesting and provocative musings by a 70+ youngster

Blogging my way back to life somehow!

Inspiration through my thoughts, experiences and travels

Read Between the Minds

what it comes down to

Welcome to the world of cats!

Musings on writing, travel, animals, and the minutia of life

Wang and The City

Life perspective from a 40 something years old guy.

"Man, no matter what it is, when you hears that call, you gots to have an answer" —Jazzbo

A bit of everything, just to keep my erroneous mind busy.

Hurtled to 60 - The Retirement Years

In search of perfect light.

.... my journey to a healthy life, making new memories and so much more

I hope to be hysterically hilarious. But maybe I'm just hysterical.

Within and without, I am one and many...

Echoes of Life, Love and Laughter

Life is too short to drink bad wine